February 11 is the International Day of Women and Girls in Science. The goal is to recognize the critical role of girls and women in the scientific and technological communities. As we commemorate this day, it is also vital to remember minority women scientists who have made significant advances in STEM (Science, Technology, Engineering, Math) fields.

Marie Maynard Daly (1921-2003) was an American biochemist and the first African American woman to obtain a Ph.D. in chemistry in the United States. She was awarded her doctoral degree from Columbia University in 1947. I first heard about Daly when I was researching the history of women in STEM for a multimedia STEM project. As a woman and a minority, it was wonderful to learn that she made a significant impact on chemistry and biochemistry. Daly overcame the dual hurdles of racial and gender bias by conducting several important studies on cholesterol, sugars, and proteins.

Dr. Daly was the first African
American woman to receive a
a Ph.D. in Chemistry in the U.S.

Chemistry was one of my favorite subjects in college, and it was great to learn about the chemical reactions and equations that Dr. Daly established. Daly’s outstanding work continues to have a lasting impact on scientific research. As a young girl, Daly was an avid reader. She had a budding interest in science and became inspired by her father’s love of science. He had been forced by economic circumstances to drop out of Cornell University, where he had been pursuing a bachelor’s degree in chemistry. Due to her father’s experience, Daly was committed to developing programs to increase the enrollment of minority students in medical school and graduate science programs. She established a scholarship fund for African American science students at Queens College in honor of her father. 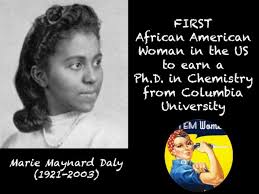 In 1975, Daly was one of 30 minority women scientists to attend a conference sponsored by the American Association for the Advancement of Science. The conference explored what it was like to be both a woman and a minority in science. This dialogue resulted in a report entitled The Double Bind: the Price of Being a Minority Woman in Science (1976), which made recommendations for recruiting and retaining minority women scientists.

For many minority women the women’s movement is seen as a movement of middle and upper class white women which does not specifically address itself to the concerns and issues faced by minority women. — The Double Bind: the Price of Being a Minority Woman in Science

Most of the women experienced strong negative influences associated with race or ethnicity as children and teenagers. As they moved into post-college training in graduate schools or later in their careers, they felt more strongly the obstacles facing women. When the women entered their career stage, they encountered both racism and sexism.

The minority woman scientist is caught in the middle of a difficult situation. She is often being pulled from both sides by women’s groups and minority organizations. If she affiliates with both, they can place a tremendous demand on her time. — The Double Bind: the Price of Being a Minority Woman in Science

It has been more than 40 years since the report, and not much has changed about the challenges and status of minority women in science. The top three reasons for the underrepresentation are:

Daly’s story helps us to recognize and acknowledge the significant achievements of women and minorities in science. Their stories continually inspire me because they showed courage in the face of adversity. I am especially grateful because they have paved the way for future minority women scientists, despite the challenges. My degrees in bioinformatics and public health have opened doors in my career, but this hasn’t come without perseverance, patience, and even failure. I have learned a lot, and continue to learn, as I navigate a career in STEM. For women who want to follow a similar career path, the best advice I can give is to work smart as well as hard, find a mentor, and remain committed.

On February 11, let us encourage and promote women’s participation in education, training and science and technology.

A condensed version of this article was published on Careers with STEM for International Women’s Day. Also, my tweet about Marie Maynard Daly was quoted  was in an article titled 15 Black Women In Science You Probably Didn’t Learn About In Your History Class.